Stringer struggling to make the ton 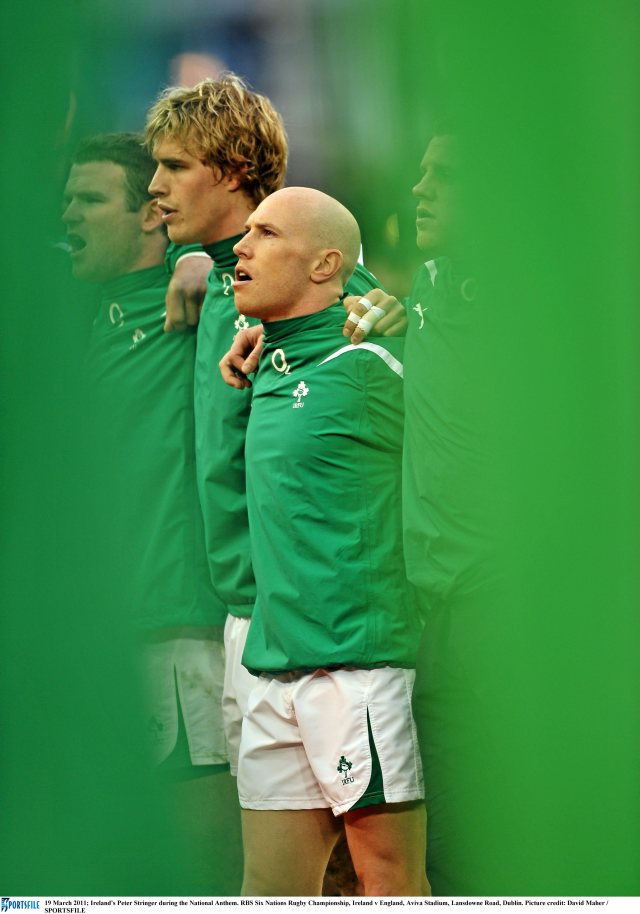 This is where it gets difficult. This is the point where the idea of being part of the international squad is not necessarily as attractive as we all presume. This is the staging post where there are those who are well in the mix, and those who are spending too much time holding tackle bags. Declan Kidney will announce tomorrow his 22 for Saturday night’s Test in Bordeaux. So if you missed out on Edinburgh, and are being passed over for France as well, then the glamour of being part of the group isn’t so appealing.

And certainly for Peter Stringer it ain’t. I understand Conor Murray will be named on the bench for Saturday with Eoin Reddan starting alongside Ronan O’Gara. So of the five scrumhalves included in the prelim squad by Kidney– a crazy number to begin with – Stringer is the only one to miss out entirely on the opening two games. At 98 caps, the odds are lengthening on him making 100.

This poses a dilemma for Kidney: if O’Leary and Reddan are certainties for New Zealand, and Isaac Boss now has Murray breathing down his neck for the third scrumhalf slot, what does the coach do with his most experienced operator?

Let’s say Murray does a good job coming off the bench in Bordeaux. In any circumstances it will be a huge leap for him but if Ireland are trading well when he comes on then his remarkable form of 2011 could see him through the Test in good nick. And if that happens then there is no point in giving Stringer any game time anywhere.

In fact the decent thing to do would be to release him back to Munster who are trying to cope without three scrumhalves tied up byIreland. Kidney is alive to the human aspect of all of this and in fact bangs on about it at every turn. So perhaps this is a conversation he has already had with his unwanted scrumhalf. Maybe that’s why he gave him the option of hopping over to play with the Reds in La Rochelle this weekend? Stringer, Mick O’Driscoll, Niall Ronan and Damien Varley will all feature for Tony McGahan on Friday night.

It’s a tricky topic to broach – the ‘you’re not in my plans’ one – and you may remember Matt Williams got it in the neck when he had a similar conversation with Trevor Brennan way back in Leinster’s early professional days – which was the catalyst for Brennan’s French career.

So perhaps Kidney and Stringer have cleared the air on this one, but the number nine is hanging in hoping hoping for a truly seismic turn of events that might take him to the ton, which would be a phenomenal personal milestone.

From Donnacha Ryan’s position that tally looks unlikely. Nevertheless all in his world looks rosy right now. Having put in a decent 52 minute shift in Murrayfield he will get to start again on Saturday, this time on the short-side. Kidney wants one of his second rows to give him options in this area and Ryan is ahead of the pack on this one.

When you look at him you don’t see a cross between Ali Williams and Jerome Kaino, which is not to say he doesn’t have some mongrel in him. Ryan is not a very imposing physical specimen and may never get to a stage where he is first choice forIreland, but at the minute he’s doing a decent job and it will be instructive to see how he fares on Saturday.

Ryan will be part of another new combination in Chaban Delmas (every area of the team will be changed to some degree), but it’s what’s immediately ahead of him that looks an unlikely pairing: Donncha O’Callaghan and Leo Cullen? I never got the impression that they were the best of mates. Not that it’s a prerequisite to a successful partnership, but neither is it a combo with much balance to it. Which makes you wonder why Kidney is pitching them in together now, when he has Paul O’Connell chomping at the bit?

I imagine it’s because at some stage in the tournament he reckons he’ll be asking them to snuggle up together again. Perhaps against Russia or Italy. So best to start now. Similarly it looks like Keith Earls will finally make a start for Ireland in the 13 shirt, alongside Paddy Wallace, and this too will be a combination Kidney might return to at a later date. If my understanding about Earls’s training ground form is correct then we’re about to see a player looking for more responsibility than he’s ever done before.

Given the delayed returns of Brian O’Driscoll, Gordon D’Arcy and Tommy Bowe – none of whom are taking contact yet – Earls needs to provide something special to keep everyone happy. As it stands, it looks like the last game, against England, before we’ll have a first choice back line in the field. That wasn’t part of the plan.

Ireland team that lost 10-6 to Scotland:

*played 50 minutes in the Tigers’ hammering away by Montpelier on Monday night.

Brendan Fanning has been involved in rugby all of his life as a player, coach and journalist. He has been rugby correspondent on the Sunday Independent since 1996, and has been reporting on the game since the mid 1980s when he stopped playing with Clontarf. In 2007 his book From There to Here, a definitive account of Ireland’s transition from amateur to professional rugby, was published to critical acclaim.
View all posts by Brendan Fanning →
This entry was posted in Irish Rugby, Munster Rugby, Rugby World Cup, Uncategorized and tagged Ali Williams, Conor Murray, Declan Kidney, Donnacha Ryan, Donncha O'Callaghan, Eoin Reddan, Isaac Boss, Jerome Kaino, Keith Earls, Leo Cullen, Matt Williams, Paul O'Connell, Peter Stringer, Ronan O'Gara, Trevor Brennan. Bookmark the permalink.

2 Responses to Stringer struggling to make the ton